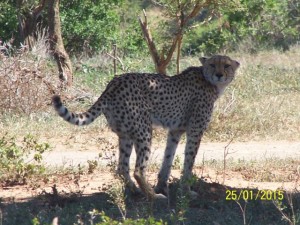 It was a weekend of great sightings despite the very hot and windy weather experienced. On Saturday we encountered a pride of 8 lions near Le Dube in the Northern part of the Park and then, about 5 km later a herd of about 100 elephants crossed the road in front of us. We also had good hyena sightings during the morning as well as good general game. On Sunday we again found the lion pride near Le Dube but the highlights of our day were a great cheetah sighting near viewpoint 17 in the South and a pair of black rhinos near the Centenary Centre turnoff. Elephant sightings on Sunday were plentiful and there were two separate wild dog sightings as well. There were plenty of white rhinos on show and also lots of giraffes. 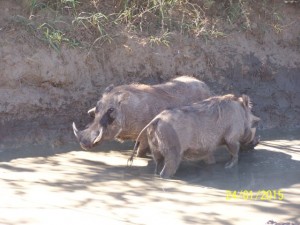 It was a weekend of great sightings despite the very hot and windy weather experienced. On Saturday... more»

We headed straight for marker 27 ( the White Umfolozi river ) early this morning and were rewarded... more»

It seems as though each day is hotter than the previous one and that the rain will never come !!... more»

Exciting news we at Euro Zulu Safaris have listened to the request of our guests and have created a new tour to Hluhluwe Game Reserve it's called the ELITE TOUR.
Click here to see more…

Hluhluwe Game Reserve has 2 main accommodation camps which offers either camping or self catering
Read more...